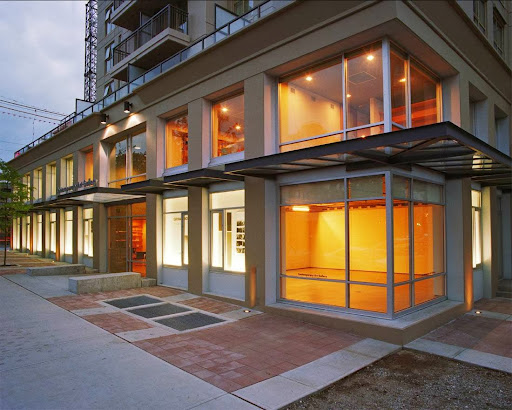 Taking its title from a poem by Walt Whitman, the Contemporary Art Gallery presents a group exhibition as the central feature of this yearâs Capture Photography Festival. Work is presented both inside and outside and across all of the galleryâs spaces, embracing a diverse set of conditions and approaches centred in a conceptual understanding of an expanded field of photographic practice that examines notions of what you see is most definitely not what you get.

Bringing together artists from Canada, Eritrea, Ireland, Sweden, and the US, the exhibition includes works that combine thematically to interrogate ideas rooted in photographic histories, engaging ideas such as veracity, recollection, remembrance, belonging, staging, and how the image documents and records these or is evidence of differing realities.

Images or shadows of divine things (2005â), an ongoing series by Irish artist Gerard Byrne. Visually rich and intellectually complex, the artistâs work in photography, film, theatre, and multiscreen installation examines the slippage between time and the act of image creation. Presented here, a selection of these black-and-white photographs seems to depict a much earlier period, evoking vernacular photographic idioms of American midcentury photography and thus pointing toward the relationship between time, appearance, and the photographic document. Through a collection of over twenty images, a sense emerges that the series has a certain scale of vision. However, it is more about picturing the historical âconditionsâ of image making than it is about riffing on an aesthetic. That sense of conditions emerges only once the particularity of the given images is surpassedâthat is when it becomes obvious that the specifics of the images are not the point, this realization becoming palpable when a sufficient number of them are grouped together.

Remainders, Repeats and Rejects (2017) is characteristic in its investigation of production whereby documentation itself becomes the artwork. Alongside a large-scale photograph of the gallery wall on which it sits atop, Arndtâs work collects and conflates personal imagery with found and staged scenarios, highlighting the notion that documentation may be all that is required for an idea to exist and resonate. We imagine wide ranging connections, invent narratives and recognize links between images, all thoughts set in motion to create a diversity of potential meaning.

Recent work by Canadian artist Kelly Lycan includes installations based on Gallery 291, the iconic New York photography gallery opened by Alfred Stieglitz in 1905. These recreations are developed through sourcing images available online, in an attempt to uncover an understanding or experience of the space while drawing on simulations of the photographic illusion of this.

Nearby Nearby, 291 Burlap Walls (2015), composed of a series of images of the walls of Gallery 291 culled from Internet searches. Printed on paper, the work creates a pixelated arena of varicoloured white grounds, where it is as if each image is forensically being drawn from some depths to emerge on the paperâs surface.

As a contemporary of artists such as Richard Prince, James Welling and Sherrie Levine who were active in New York in the early 1980s, Vikky Alexander is often associated with the Pictures Generation. She is best known for work that foregrounds a strong interest in the histories of architecture, design, and fashion, often focusing on locations such as shopping malls, showrooms, and show apartmentsâsites of desire, aspirations, and ideas of home. The images are often complicated through light, reflections, and refractions and speak of a set of conditions and values embedded in appearances as seen through furnishings and the notional view from the window (here, a large-scale photo mural). Shown outdoors at Yaletown-Roundhouse Station,

Model Suite (Sliding Door) (2005/17) interplays with its architectural surroundings; the stationâs glass pavilion lends a further physical and visual layer as we see the daily activity on the street through the work itself.

Ambient Advertising (2016), installed across the CAGâs windows, is a reconfigured work by Toronto-based Kelly Jazvac. Salvaged billboard images that she has reframed, manipulated and cut through, seemingly in reference to a quintessential Canadian landscape, visually envelop the gallery at street level. Taken from contemporary advertising, the imagery appeals to our collective sense of identity through reference to the romantic and awesome natural world that surrounds us while questioning the feeding of desire as driven by contemporary consumer culture.

Sunsets (2012), by American artist Lisa Tan, combines literature and various historical and personal references to materially explore the intricate relationship between language, image, and experience. The video, filmed on the threshold between night and day, unfolds like a conversation. Seemingly inconsequential things pop up and take hold: a phone call interrupts, the sun starts to set, a stranger asks a question, translations are needed. The work narrates Tanâs engagement with enigmatic writers, with histories, technologies, and geographies that she knows, in order to mediate those that she doesn’t.

Concerned with issues of visibility and the slippage between a moment and an image, Irish artist Niamh OâMalley investigates the construction and arrangement of time and document as revealed through the moving image. Across two large-scale screens, the silent black-and-white video

Glasshouse (2014) unfolds as a lengthy tracking shot. As the camera moves seamlessly from left to right along the glass panes, the natural idyll disappears here and there as the glass becomes more or less opaque. Through this OâMalley draws our attention to the process of looking, the camera seemingly attempting to locate and uncover meaning. Yet as images fragment, blocked by stained and broken glass, such efforts are thwarted, challenging our perception of what it is we are actually viewing and of how the images are constructed.

Seizing Hold of a Memory as It Flashes Up (2010) is a blind embossing using the speech of twelve-year-old Severn Suzuki, daughter of Japanese Canadian science communicator and environmental activist David Suzuki, delivered at the 1992 Earth Summit. Suzuki and members of ECO, the Environmental Childrenâs Organization, raised the money to travel from Vancouver to Brazil so they could attend the United Nations Conference on Environment and Development in Rio de Janeiro. Here, Suzuki delivered her speech before 172 representatives of different countries, 108 heads of state, and some 2,400 NGO representatives; 17,000 of the people who attended the parallel NGO Global Forum had consultative status, resulting in a meeting that ultimately led to the Kyoto Protocol.

Toronto-based artist Greg Staats, Kanien’kehÃ¡:ka (b. Ohsweken, Six Nations of the Grand River Territory) whose works combine language, mnemonics and the natural world as an ongoing process of conceptualising a Haudenosaunee restorative aesthetic that defines the multiplicity of relationships with trauma and renewal. Staats addresses the systemic deficit of languageâthrough personal and community archives and an intellectual and aesthetic interpretation of the body and ceremony. The installation

untitled (objects of reciprocal thinking) (2014) combines both works from the beginning of the artistâs reflection of public and private within a Haudenosaunee linguistic and mnemonic continuum linked to place and recent works based on a reciprocal methodology. When at the edge of oneâs condolence and within the liminal metaphysical space prior to renewal, there lies a hesitancy to move forward. While external and internal barriers must be overcome, theÂ process must be completed with the help of others, both as witnesses and holders of the good mind. This ceremonial movement is comparable to moving from the darkness of the forest into the clearing where the light illuminates breath and oneâs footing becomes clearer. The Mid-Winter (renewal) ceremony Gaihwayao:ni:, translated as âencouragement

Chicago-based Canadian Eritean artist Dawit L. Petros similarly reflects through personal and cultural histories on ideas surrounding place making that are centred on a critical rereading of the relationship between African histories and European modernism. The book

About the Authorâs Journey from Ethiopia to Italy and about the Impressions Made on Him by His Stay in That Country in Tigrinya, by nineteenth-century writer Fesseha Giyorgis, was the first text published in the Tigrinya language (used in present-day Eritrea and Ethiopia). Using this as a guide, Petros undertook the journey from Ethiopia to Italy, his contemporary journey mirroring the historical passage across the Mediterranean Sea as well as the one undertaken by those currently fleeing to safety. When he arrived in Italy, the artist met a group of Eritrean migrants, with whom he made

Untitled (2016), a collection of images with these individuals holding mirrors or archive materials in visual dialogue with the surrounding landscape. Viewed together, the photographs offer a metaphor-rich articulation of the fluidity of contemporary transnational experiences and attendant issues of cultural negotiation, speaking to how images and objects enable a sense of belonging or retrieval, both public and private.